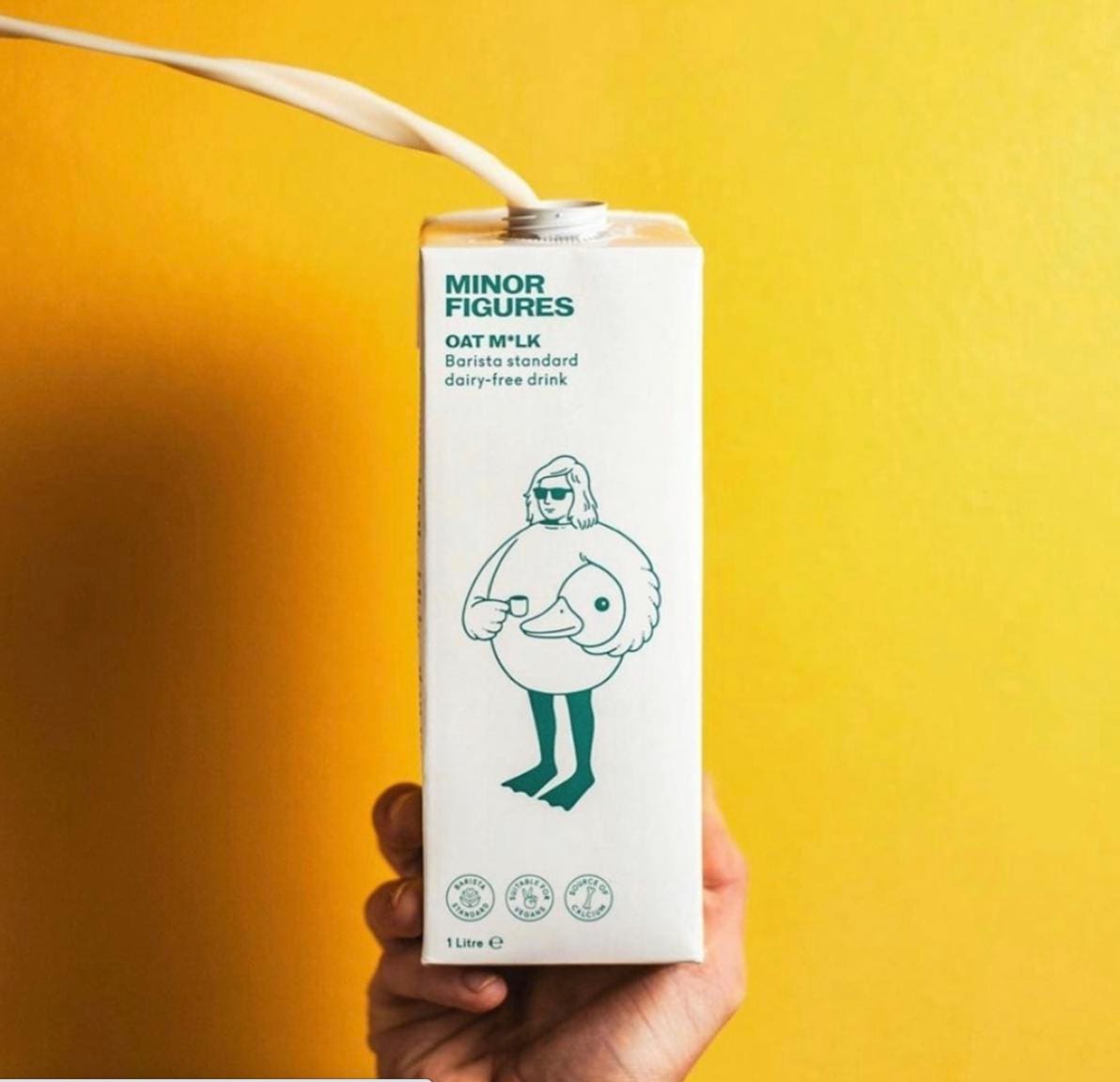 Oat milk has become one of the go-to alternative milks in the market, with over $200 million in sales last year. It edged out soy and sits in the #2 slot.

U.K.-based Minor Figures is hoping to take a piece of that pie with their barista-style oat milk, which comes in some quirky packaging representative of the brand’s CEO and core team.

“I think people would look at me and think I’m a bit odd. And that’s OK,” jokes Stuart Forsyth, an Australian entrepreneur who was one of the co-founders of the popular KeepCup before venturing into the world of oat milk.

Aside from Minor Figures’ fun, whimsical branding, the company is keen on taking a more eco-forward approach. Given Forsyth’s background with the KeepCup, which was designed to reduce waste in coffee shops, it’s not a surprise.

That’s why Minor Figures is in the process of becoming a B Corporation, has decided to invest in carbon offsets to be carbon neutral, and is offering an organic oat milk product (in addition to its conventional offering for more cost-conscious customers).

The oats, which are procured from a variety of suppliers throughout Europe, have historically been processed in the U.K. and Australia for the respective markets. Now, as they expand across the U.S., they’re hoping to manufacture closer to their customers here in America.

Building this global brand has taken time though. Forsyth, and his brother and sister, spent years building KeepCup, slowly taking it from Australia to the European market. That gave them an opportunity to spend a fair bit of time in the specialty coffee industry, learning its ways.

When Forsyth arrived in London in the late 2000s, he recalls that the specialty coffee scene was very small: you could probably count the number of specialty coffee shops on your hands, he says. Since then, London’s specialty coffee industry has exploded — and in recent years, so has the demand for alternative milks. Interestingly, Forsyth started Minor Figures in 2014 with cofounders Jonathan Chiu and Will Rixon to sell cold brew coffee, not necessarily oat milk (though that’s what they’re becoming synonymous with nowadays).

Working with Raw Material, a London-based social enterprise, they sourced premium coffees for their ready-to-drink cold brew. Raw Material, which works much like a middleman or trader in specialty coffee, pledges to put all its profits back into the coffee farming community. Forsyth chose to work with the group, he says, because they felt it was a better option than Fair Trade, putting more money into producers’ hands and streamlining the sourcing process for them in London.

For nearly 5 years, Minor Figures grew slowly, with its profits going back into the business, and raising small amounts of capital from family and friends. Only recently did the company take on an investor — who happened to drink a coffee with their oat milk at a cafe in New York. “He got in touch with us, said he wanted to learn more, and was shortly thereafter in London. It was not at all planned.”

With about $10 million in investment, the company was ready to broaden its reach and make a bigger push on its oat milk, not coffee this time. And then the pandemic hit in 2020: with most coffee shops shut, Minor Figures had to focus on online sales and grocery stores instead of cafes.

“That was a really hard time. We all took on additional roles in the company, juggling different responsibilities. No one was sure about their jobs. But we survived. And now looking back, we’ve built a pretty resilient team,” Forsyth says.

In the process, they continued their journey towards becoming a B Corp and are now carbon neutral through carbon offsets, which Forsyth assures are of gold-standard. In fact, they invited consumers to help them decide which projects to support through an informal survey on their blog — all of which have to do with the coffee community in some shape or another.

“Overall, I think businesses are responsible for doing something about climate changes. We can’t just put that responsibility on consumers. We have to do something as well, and lead the way.”

Oat milk has been documented as one of the more eco-friendly alternative milks on the shelf — it takes less water than almonds, is easier to source, and can appeal to a wider base of consumers (given soy and nut allergies). Traditional dairy, Forsyth says, is more of a “zombie” industry, “supported by governments.” And with Gen-Z and Millennials pushing for plant-based diets, he sees alternative milks as the path forward.

Unlike other oat-based offerings that have several gums and binders, Minor Figures has tried to keep their formulation simpler: water, oats, oil, and salt primarily. Designed with coffee in mind, Forsyth says they wanted something that would enhance the flavor of coffee, not alter it.

Nevertheless, the oat milk market is competitive and crowded at the moment. So Minor Figures has chosen to stand out with some unusual branding: instead of the go-get it and hustle culture, each of their items — either on the oat milk box or on the ready-to-drink cans— features a drawing partaking in more laid back activities: having a coffee, blowing bubbles, skateboarding. Forsyth says that their social media looks like “a friend’s feed. It’s not all branded out and pretty.”

Despite embracing a slower, easy-going vibe, the company does have some ambitious goals, one of which is to get to carbon zero by negating emissions. “Offsetting, we realize, is not perfect.”

But being bullish on the environment is not just a moral stance, he says. “It’s critical for business in the future.”

It might seem like a lofty target for a global company which ships around goods. But Forsyth says that he likes to live by advice given to him by his mom: “Bite off more than you can chew, and then chew like hell.”