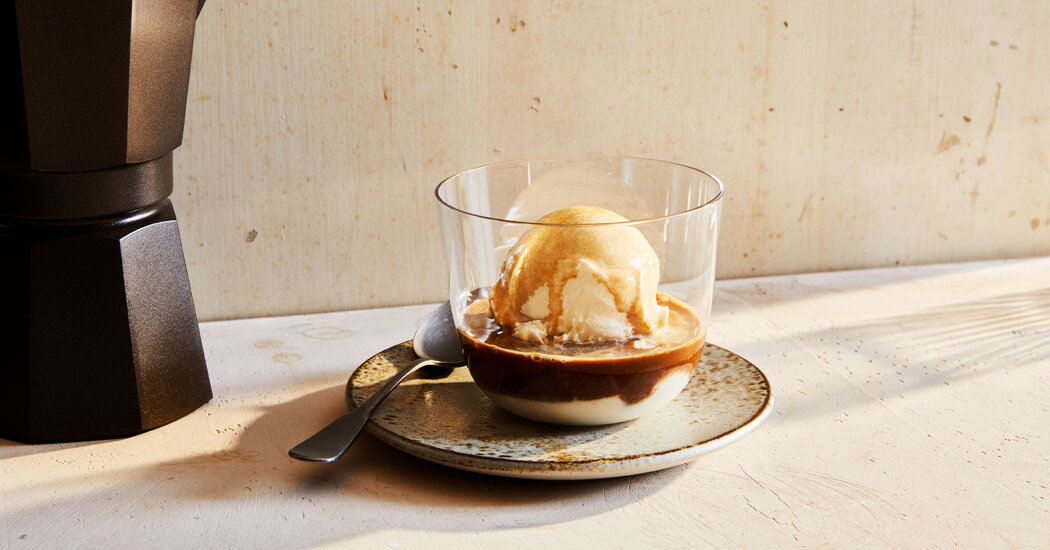 Affogato means “drowned” in Italian, and you can drown just about any ice cream. Fior di latte and crema are most popular in Italy, though vanilla and chocolate are also excellent. Dulce de leche would be wonderful, with its caramelized milkiness, as would the bitterness of cherry amaretto. Pistachio is a welcome change from the unrolling highway of routine. Pisticci, a trattoria in Morningside Heights in Manhattan, drowns a tartufo — a bombe made with vanilla and chocolate ice creams with a Maraschino cherry in the middle, all encased in a hard chocolate shell — in espresso. The chef, Edmundo Garzón, told me that he serves 50 to 60 of these a week. “The secret is the coffee,” he said. “Espresso coffee. Very fresh, one shot. Double shot is too strong. Good coffee.”

But you don’t even need to use coffee in your affogato. According to the Tuscany-based food writer Emiko Davies, in Italy an affogato could be plain crema gelato drowned in chocolate or cherry syrup, or hazelnut gelato drowned in Marsala. “I’ve even seen a gelateria in Turin that does one with lemon and raspberry sorbet drowned in beer,” she said. A sgroppino, a scoop of lemon sorbet drowned in prosecco, might be considered affogato’s Venetian cousin. In Marcella Hazan’s “Essentials of Classic Italian Cooking,” a recipe for “The Chimney Sweep’s Gelato” calls for dusting an egg-custard gelato with finely ground espresso and drowning it in Scotch or bourbon.

Nick Larsen agreed that the evening drink he regularly makes for himself at home — a float of salted caramel ice cream and condensed milk drowned in cold brew — might be considered an affogato. “It’s just not a hot extraction,” he said. The real stuff he saves for Sugar Hill Creamery, the ice cream shops in Harlem that he runs with his wife, Petrushka. I’ve had many a Larsen affogato, each time swapping out the ice cream flavor according to my mood. The savory hum of the malted vanilla ice cream brought out the complexities of the espresso. The coffee ice cream with turmeric and ginger candy had notes of masala chai, warming me with its electricity. Plain vanilla provided the duvet of cream and caffeine that kept me going back for more.

Hallie Meyer, the owner of Caffè Panna in Gramercy Park, said her shop gets a regular afternoon crowd of solo customers like me. They sit down, order an affogato and leave. “It feels almost mature to have espresso poured over your ice cream, you know?” she said. I asked Meyer to walk me through her ideal affogato. This is it: A clear glass, so you can see the ice cream drowning. No eggs in the ice cream base, “because I want to taste the dairy,” she said. The espresso should come one-half to three-quarters of the way up the scoop. And on top, her pièce de résistance: a dollop of panna, Italian for “cream.”

The best affogato for me is one in which you can’t tell where the feathered edges of the melting ice cream start and where the tawny foam that rests atop the espresso ends. One of the creamiest affogati I’ve ever had was at Gran Caffè L’Aquila in Philadelphia. I asked for a scoop of fior di latte, which I often enjoy in an affogato for its pure dairy flavor. The barista pulled the espresso and then had to walk across the cafe, to where the gelato was on display, in order to scoop the fior di latte. That walk was the perfect amount of time for the espresso to cool down ever so slightly, which meant the ice cream didn’t melt too fast upon contact with the coffee. The foam stayed thick and buttery — or was it the fior di latte?